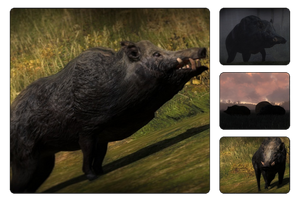 Wild boar (Sus scrofa), also known as wild pig, is a species of the pig genus Sus, part of the biological family Suidae. The species includes many subspecies. It is the wild ancestor of the domestic pig, an animal with which it freely hybridises. Wild boar are native across much of Northern and Central Europe, the Mediterranean Region (including North Africa's Atlas Mountains) and much of Asia as far south as Indonesia.

Adult males develop tusks, continuously growing teeth that protrude from the mouth, from their upper and lower canine teeth. These serve as weapons and tools. The upper tusks are bent upwards in males, and are regularly ground against the lower ones to produce sharp edges. The tusks normally measure about 6 cm (2.4 in), in exceptional cases even 12 cm (4.7 in). Females also have sharp canines, but they are smaller, and not protruding like the males' tusks.

When hunting Wild Boar, the hunter must be careful not to get too close. The animal may charge the player. If the animal hits the player, the player is put into the Player Hurt state.

Introduction
If you have a tent to spare, place it in the northern most tip of Hirschfelden to start your Wild Boar hunting sessions. Many tips in the Hunting Tactics section will send you to places where you can find your animal of desire a bit more exclusively, but the stating position at this tent is different. You will surely find the Wild Boars, but you will also see many Roe Deer, Pheasants and Foxes there which makes it a very busy place. Because some Wild Boar sounders (groups) can get quite big, the change for hearing a call from them is rather high. You will also find many tracks that may lead you away from the open fields into thick autumn-colored vegetation. Once there, you will know if you have built up some stalking skills if you can deal with a bunch of pigs trotting ostensibly disorganized through the woodwork.

Spawning
Wild Boars spawn as singles in rare cases or in mixed groups of up to seven hogs. Similar to the Feral Hogs, a common pattern is two males and three females and a sounder.

Clothing
The Wild Boar's senses are average compared to some other animals. The boars are more aware than the deer species though. Consider using Sneaky 3D Fall Camo clothes to reduce your visibility. Sneaky 3D camo clothes provide no scent or sound reduction though. In an area with a lot of Wild Boar activity such as the northern parts of Hirschfelden you may also use a Ghillie Suit, but you will likely be more successful roaming and scanning the open fields of this reserve.

The smelling sense is the Wild Boar's most developed one and is even stronger than that of the Feral Hog of the same family. Pay extra attention to the according protection and the wind.

Searching
The scores of Wild Boars and Feral Hogs are based on their weight and their tusk sizes. Both values are added to make the total score. If the weight part of the score is bigger, then the final score gets a "W" added. If the tusk part is bigger, the final score gets a "T" added. The weight to score relation is rather high. The heaviest boars usually have the most impressive tusks. Follow tracks of heavy males, ideally heavier than 210kg. The maximum weight is 240kg for males.

Following a big scoring boar or a sounder with many pigs in the thick vegetation of Hirschfelden can be a really good test for your stalking, spotting and shooting skills. The darkish Wild Boars seem to roam the land totally unorganized at times. They alternatively walk and trot and can be far and apart one minute and back close together the next. The Wild Boars have a special feeding (or "rooting") track like their smaller family pears, tracks that you will not see for any other species. When the boars dig for roots preferably in the early mornings or late evenings they leave a patch of dirt on the ground. Be careful when you find these tracks, you don't know how much time they have spent there and how much this has slowed them down. In the thick woods you will also find yourself running into sleeping Wild Boars or groups thereof. Their hearing is not as good as their smelling sense and your heart will jump when suddenly they get up and run right next to you. Or if they feel cornered and attack, often times out of nowhere.

Luring
Use the Hog Caller or the Hog Scent Spray for luring single or multiple animals towards you. The luring effect of the caller lasts quite long, but at the same the Wild Boar tends to approach you very slowly. If there is a group many times only one or two animals are on the move. The others will stand around a bit before making the next step. They can come really close and you have to be careful not to be attacked. The walk towards you is fairly straight. You can easily plan and execute an ambush on the Wild Boars from a stand or an elevated ambushing position. The behavior that you learn around Wild Boars can be easily applied with the Feral Hogs and vice versa.

Baiting
This animal can be lured with Bait, i.e. food that is presented to the animal in appropriate containers. The baiting stations have two effects. They increase the number of spawnings of the attracted species in the area, and they attract those animals that come within the attraction radius of the container. Baiting is used by many players to accumulate great numbers of animals around the stations. Consider this very effective method if you enjoy hunting the species in question. Hunting your feeders can be nicely supported by using stands. Place yourself in a stand and shoot any number of baited animals near the feeder. Others will scatter and run away, only to return some time later. The attractiveness of the feeder will stay at 100% for the duration of the hunting session. You can harvest a great number of animals if you spend a few hours at your baiting station.

Field Judging
When you have multiple Wild Boar males especially around feeders, a high Spotting Skill is very helpful. If you are just building up this skill, look out for males with big tusks when you are close. From further away it might be a bit more difficult to judge the tusks when a boar is not facing you or moving through vegetation. You may then look at the body size. Often times you will find a lot of males and females around a well performing baiting station, but only one or two will be "monster size" boars in the most cases. If you are not sure which of all the present males will score best, take out these big ones first.

The pig species in the game have a fat shield that heavier (older) males build up by fighting each other. This raises the penetration threshold slightly for organs that are protected by the shield. This promotes a tactical choice of shooting distance and caliber, depending on the size of the target. The fat shield requires the hunter to plan the shot. Bring your strongest rifle. Avoid random shots from further away, or to the backside of these pigs, or you will need to search them for a long time. Often times you cannot even wound them enough to kill them with one bullet if the shot was placed badly. For heart shots you need to aim slightly behind the front leg, as opposed to other animals that have their heart more centered above the leg.

Following a spooked Wild Boar is hard, even more so if it scores high. These males can encounter you from far away. It is essential to constantly glass the area. If you finally find a roaming track after many fleeing tracks, you have likely come too close already and spooked it again. Pay attention to the rivers or shores of Hirschfelden where they will turn around and detect you even sooner.