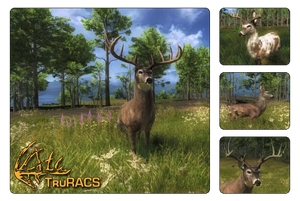 The white-tailed deer (Odocoileus virginianus), also known as the Virginia deer or simply as the whitetail, is a medium-sized deer native to the United States (all but five of the states), Canada, Mexico, Central America, and in South America as far south as Peru. It has also been introduced to New Zealand and some countries in Europe, such as Finland and the Czech Republic. It is the most sought after big-game animal in the world.

The species is most common east of the Rocky Mountains, and is absent from much of the western United States, including Nevada, Utah, California, Hawaii, and Alaska (though its close relatives, the mule deer and black-tailed deer Odocoileus hemionus, can be found there). It does, however, survive in aspen parklands and deciduous river bottomlands within the central and northern Great Plains, and in mixed deciduous riparian corridors, river valley bottomlands, and lower foothills of the northern Rocky Mountain regions from South Dakota and Wyoming to southeastern British Columbia, including the Montana Valley and Foothill grasslands.

The conversion of land adjacent to the northern Rockies into agriculture use and partial clear-cutting of coniferous trees (resulting in widespread deciduous vegetation) has been favorable to the white-tailed deer and has pushed its distribution to as far north as Prince George, British Columbia. Populations of deer around the Great Lakes have also expanded their range northwards, due to conversion of land to agricultural uses favoring more deciduous vegetation, and local caribou and moose populations. The westernmost population of the species, known as the Columbian white-tailed deer, once was widespread in the mixed forests along the Willamette and Cowlitz River valleys of western Oregon and southwestern Washington, but today its numbers have been considerably reduced, and it is classified as near-threatened. The white-tailed deer is well-suited for its environment. Fossil records indicate that its basic structure has not changed in four million years.

Introduction
The Whitetail Deer is the animal with the greatest spread over the EHR reserves. It can be found in all "American" based maps. A majestic buck is always a welcomed trophy on any hunt, even if you are after other animals.

Spawning
Unlike many other deer species, all Whitetail bucks and does spawn and travel alone. If you encounter more than one of either gender close to each other, it is by pure random, or because multiple animals were attracted by the same lure.

Searching
Weight does correlate somewhat with the score. Follow tracks from heavy bucks. The highest scores are not necessarily achieved by the heaviest bucks though, so consider mid size bucks just as much. Only skip small weights. If you are a fervent Whitetail hunter however you will react to all buck calls and lure them towards you just enough to be able to make a judgment whether the animal is worth harvesting.

Luring
Use the Deer Bleat or the Deer Grunt to lure Whitetails. Both callers have the same luring effect, and the effect is the same for both males and females. You may use Whitetail Urine Spray which lasts a lot longer than the caller, and lets you safely move into a hiding place or stand.

Field Judging
If you are not sure whether a Whitetail buck is worth a shot, look for a wide spread of the main beams and for long points. Field judging takes some practice, because some bucks can have longer tines on the outer ends of the beams, but missing the tines on the inner parts of the beams close to their heads. Avoid short points even if the spread of the main beams is wide.

If the animal flees
If you spook the animal of your desire, follow the tracks crouching. Use your optics and try to spot it, and also look for tracks or vocal signs. Do not go too fast. The animal can stop fleeing abruptly and return to roaming, and the roaming can be in any direction including coming right back at you. If you end up bumping into the animal it will flee again. Take your time. If the animal is worth it, a few more minutes will pay off. Expect very long fleeing distances, especially of the larger Whitetail bucks. If you spook an unseen buck, the number of fleeing tracks can be an indication for the final score. If there are only a few fleeing tracks, the buck is not worth following. If you find 5-6 tracks however, consider tracking the buck down.

Whitetail Deer with Non-Typical Antlers can occur but are rare to find.

Community content is available under CC-BY-SA unless otherwise noted.