Hunting waterfowl is different than hunting other animals in theHunter. While tracking and spotting are key to a successful hunt on deer, bear, turkey, etc., these skills are less important for waterfowl hunting. You will discover very soon that it is a totally different experience. There are about 30 birds that start on the map (ducks on water, geese on ground) when the game starts. These are like all other animals randomized over the map at the start of the game. All other birds however spawn and despawn during the game. A flock will spawn near the player and fly over the reserve. When it has left the player's view, it will despawn. 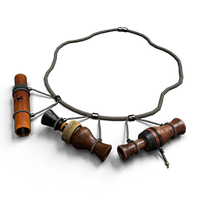 This upgrade lets you use your duck callers in a pie menu. Equip all callers in the open inventory slot at the bottom and use the "N" key to bring up the pie menu. This upgrade is not an equippable item. Upon purchase, lanyard functionality is unlocked.

There is an entire article on Decoys covering much of waterfowling as well.

Waterfowl Blinds can be used by several players and provide a good visual protection against the waterfowl. They are designed for specific areas and protect against specific birds.

How to use the Waterfowl Lures

Spawning
Waterfowl spawns outside the map and flies over the reserve. After leaving the reserve, the same birds can reappear again in another flock later on. You may recognize this yourself when you spot a rare bird such as a Black Hybrid Mallard multiple times. Waterfowl flocks are always mixed groups of males and females. Duck flocks can also be a mix of different species, especially as your hunt progresses to an hour or more.

Preparing the hunt
Find an area where you can often see high flying flocks. Birds will only land if the landing target is big enough for them to land on, so you want to position yourself very close to big water places (ducks) or fields (geese). Consider placing a tent right in this area. This way you can start your hunts right where the action happens! Now make your position attractive! Your goal is to get them to break from high flying flocks and land near you. The birds are attracted to Decoys of their kind as well as the callers mimicking their own sounds. Using both at the same time has the best effect. The decoys imitate birds sitting on the water surface or corn field. When you now add their typical sound with the callers, the illusion is perfect for them and they pay you a visit. Set out the decoys a few meters apart from each other. 24 decoys have the best attraction effect. Setting up more in the same area does not increase the attraction of the area any further. Learn more about the mixing of different duck decoys here.

Waterfowl can see your movements from far away. You can lie flat on the ground, or you can consider setting up a Waterfowl Blind. Three people can wait in such a blind for the birds to approach. In the blind, you don't have to lay on the ground but can crouch. The blind nicely protects your movements from being spotted by the approaching birds, but also against other species that might be roaming the area.

Luring
Ducks and Geese can spawn on the ground or come flying in groups about 60m up. Scan the skies for incoming flocks. You will hear a quacking or honking of approaching flocks. Once you spot a flock, start calling with the appropriate long range caller. The birds are hard to predict how they will behave when they spot decoys or hear calls. In the worst case an entire flock might just pass without taking notice. However in most cases you will see some birds detaching themselves from the group and starting to glide into your area. They can come flying right to your call, or they can seek a feeding place further away from you.

Some birds might have been successfully lured away from their flock, but they decided to land outside your shotgun range. With the species specific short range caller you can now imitate their feeding sound. This will lure birds to where you are. So combine the callers! The long range caller increases the chance of them breaking off from the large flock and beginning to circle the area where the call originated. However without using the short range caller there is no guarantee that they will fly or land close enough to your location for a shoot. In this case they will choose a random location where there is enough space on water or land. They can land next to you or quite a bit further away. Using the short range caller basically increases the chance of you getting a shot at them.

Differences in luring geese vs. ducks:

Shooting Waterfowl
The constant movements of swimming ducks or walking geese can make shots with a bow or crossbow a nice challenge. Shooting birds with bows further out will not spook nearby fellows. The real deal however is to shoot the birds in the air! Whistle with the "Make sound" key (default: F; see Controls) to flush the birds just as you do with the pheasants. You will receive a score for birds shot on the water ("G" score), but only birds shot in the air ("A" score) will count for competitions, leaderboards and missions. So make good use of your shotguns! The constant supply of new flocks will need you to be equipped with plenty of Birdshot ammunition! Shot waterfowl will drop dead to the ground or water surface. In water they might float to the other side of a river or lake, but you should always be able to retrieve them. Consider using a retriever dog for collecting shot birds.

The following location is good for duck hunting for various reasons: 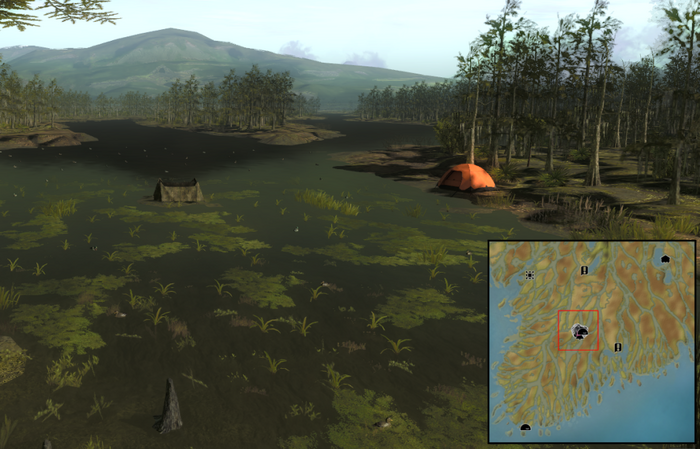 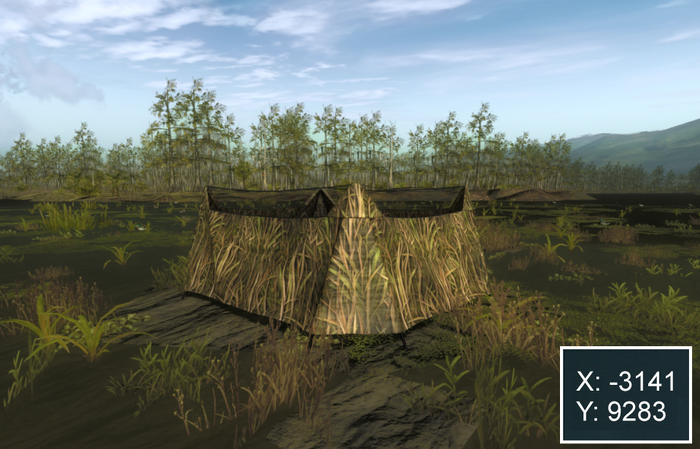 Hunting Ducks On The Go

(from BlindTyldak)
"I bought the long range caller to see what would happen, and I got ducks."

"In about an hour just using the long range caller (no blind, no decoys, no short range call, full B&C) I was able to break off four sets of ducks, averaging 3-5 per break. This is DEFINITELY not the best way to hunt ducks, but it is definitely possible to be successful at it." 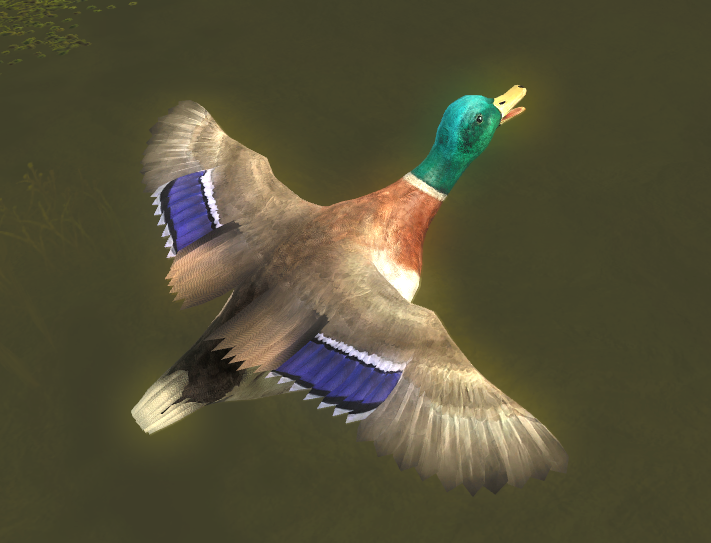 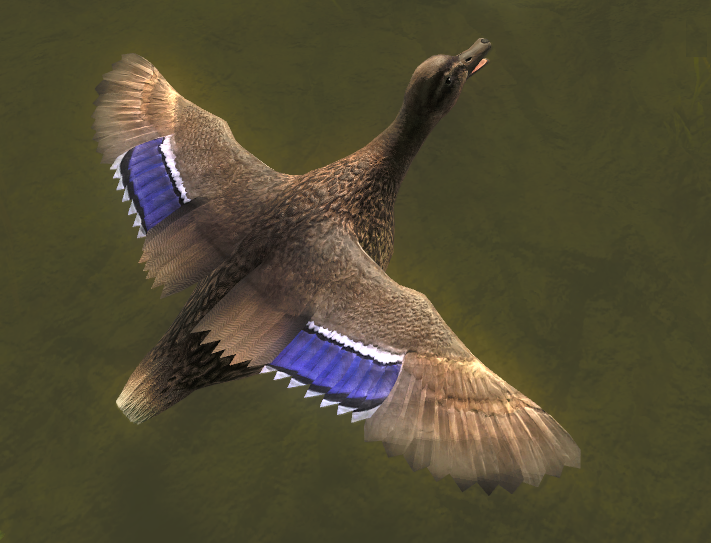 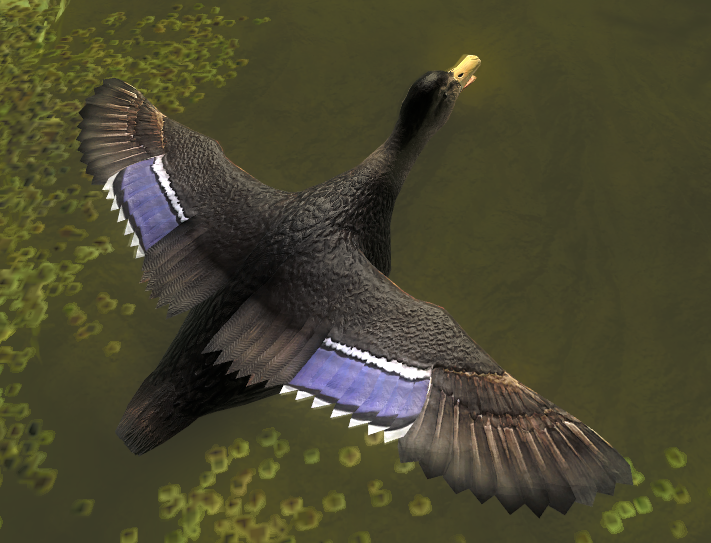 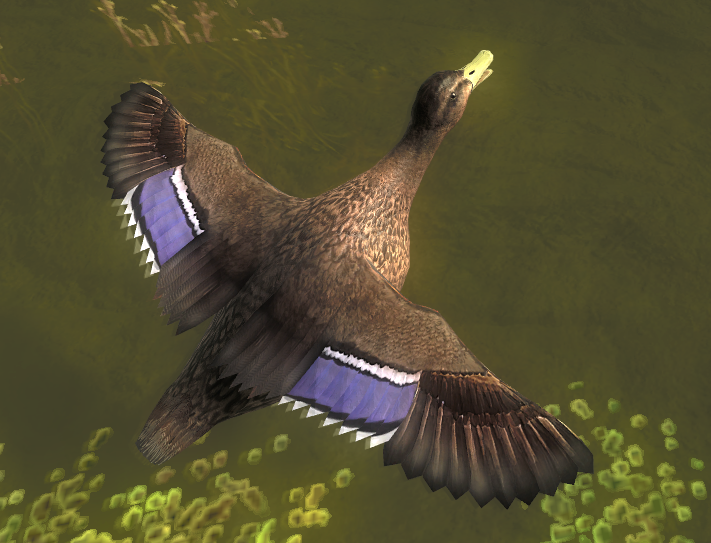 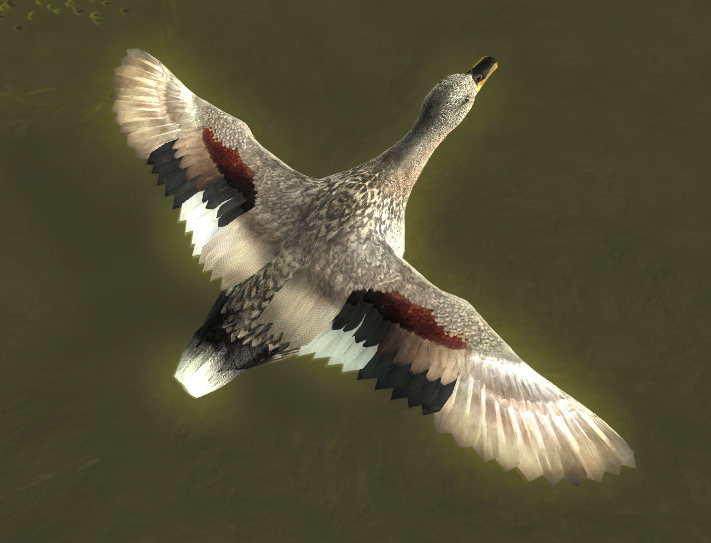 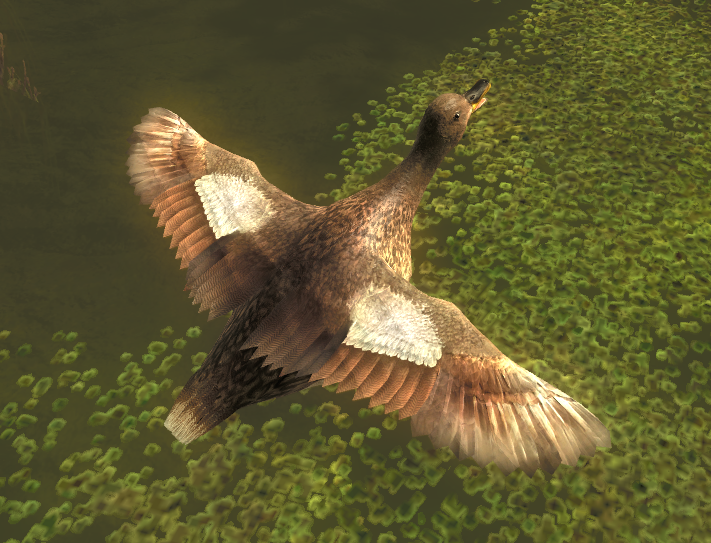 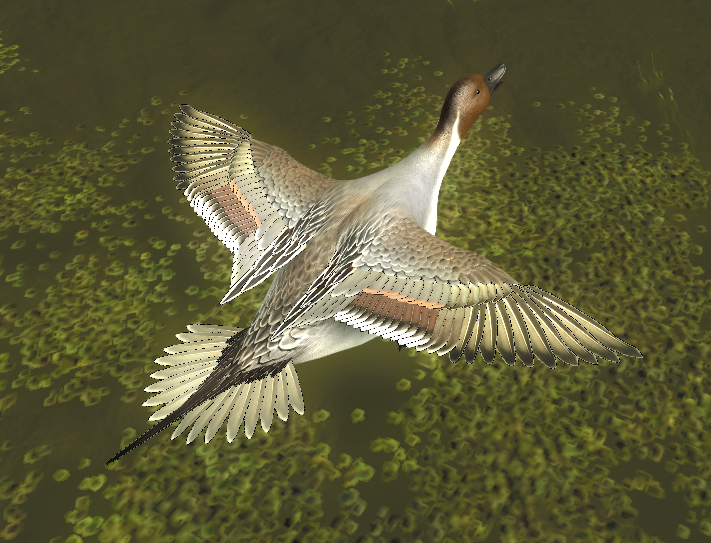 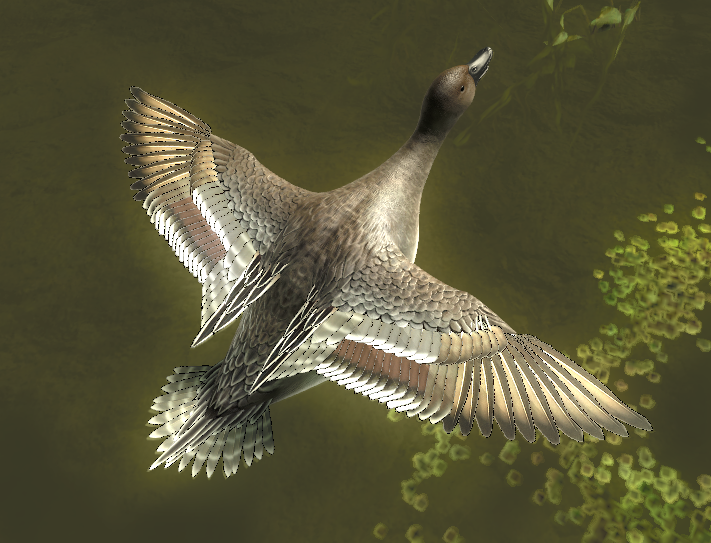 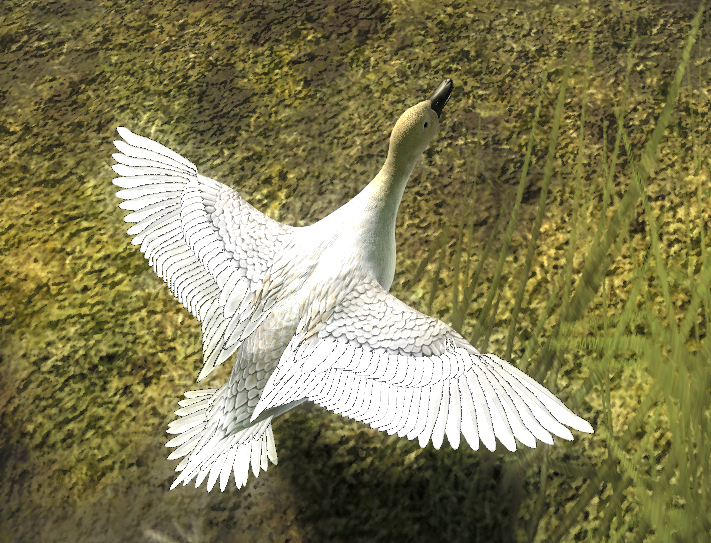 Ducks about to land

Shooting duck with the SxS

Ducks in the sky