Out In The Field

When you get out into the woods, keep your eyes on the ground and your ears open... Animals leave telltale signs, tracks, droppings and blood trails that, if interpreted correctly, can help you get close in for a shot. Visual clues are easy to spot in the game; they’re surrounded by a dome shaped glow (known as tracking domes) making them distinct from the rest of the environment. Audio signals are also available so, listen out for any deer calls as these will also help determine where the target might be. Animals leave clues more often when changing direction.[1]

As of July 18, 2013, dome colors can be selected by the user within the game's settings. For a more difficult game experience, It is possible to have no dome displayed. [2]

When you’ve found a clue, use your HunterMate to correctly identify them, and get more information about the location of the target. The HunterMate is a handheld device that contains your hunting maps as well as functionality designed to help you to track animals successfully.

As you move through the world, you’ll see animal clues; e.g., prints, droppings, or blood trails as well as hear audio clues. Whenever you locate or hear a clue, push the left mouse button with the HunterMate equipped. This makes it check the clue and provide information on the animal that left it, such as the species, and either the approximate direction it’s traveling in, or in the case of an audio clue, it’s approximate location. To return to the mini map, press the right mouse button, this will reveal information on the animals estimated whereabouts according to the track identified.

All clues are derived from individual animals. Finding one clue from an animal is the first in the trail, if you find three clues from the same animal you will have successfully tracked an animal. This gives you more information to use when tracking.

If you find a track from an animal other than the one you’ve been tracking, you can choose to ignore the new trail or abandon the old one. However, if you identify a clue from a previous trail, the HunterMate will pick that up from where you left off. 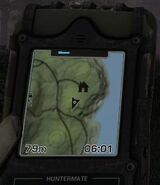 Until you have reached a certain level in tracking, or have spotted the animal you are tracking, most of the time you will not know the gender of the animal, shown by an icon of both a male and a female [3]. Successfully identifying different tracks results in better information being posted to your HunterMate map. Prints will give you a cone indicating the area the deer traveled after the print was made.

Identifying droppings will give you a circle around the dropping location showing how far the animal has moved since the delivery was made. By successfully identifying three of these tracks in a row you can get more detailed information, covering both possible direction and distance. 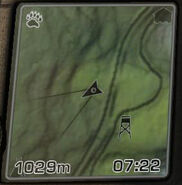 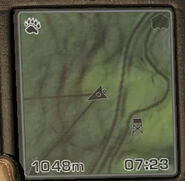 Direction of travel with radius 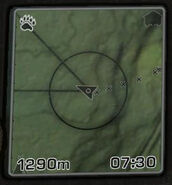 Direction of travel with radius
Community content is available under CC-BY-SA unless otherwise noted.
Advertisement