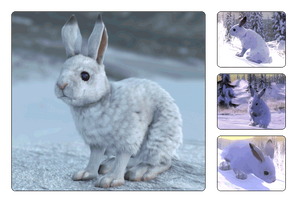 The snowshoe hare (Lepus americanus), also called the varying hare, or snowshoe rabbit, is a species of hare found in North America. It has the name "snowshoe" because of the large size of its hind feet and the marks its tail leaves. The animal's feet prevent it from sinking into the snow when it hops and walks. Its feet also have fur on the soles to protect it from freezing temperatures.

For camouflage, its fur turns white during the winter and rusty brown during the summer. Its flanks are white year-round. The snowshoe hare is also distinguishable by the black tufts of fur on the edge of its ears. Its ears are shorter than those of most other hares.

In summer, it feeds on plants such as, grass, ferns and leaves; in winter, it eats twigs, the bark from trees, and buds from flowers and plants and, similar to the Arctic hare, has been known to steal meat from baited traps.Hares are carnivorous under the availability of dead animals, and have been known to eat dead rodents such as mice due to low availability of protein in an herbivorous diet. It can sometimes be seen feeding in small groups. This animal is mainly active at night and does not hibernate.

There is no attractant for the Snowshoe Hare.

Introduction
The Snowshoe Hare is, just like the Cottontail Rabbit a very silent and inconspicuous animal. Although very lively and constantly looking for food, it does not make sounds loud enough to be detected unless you come really close to it. The Huntermate cannot detect it, and unless you sneak through the deep snow, most of the times you will hear a snowshoe hare will be when it runs away from you. The difference to the cottontail however is that you can detect it from far away, appearing as a darker dot in the generally white environment.

Spawning
Snowshoe hares spawn and roam alone and do not seem to be bound to specific areas. Of course there are certain areas on the map where they will start and other where you will never find them. Check the Whiterime Ridge map for suitable hunting locations.

Luring
There is no attractant for the Snowshoe Hare.

Searching
If you are after the fat hare follow tracks of heavy females (!). A high Tracking Skill for this animal is inevitable, so read all tracks you can find. Females can reach 2kg (2000 grams = scoring 2000) and are heavier than the males which only reach 1800 grams. The weight is the score, finding a heavy hare will mean finding a high score. Glass the area often and look for movements in the distance. The white hare only appears when close by. Further away it turn into a darker dot and can be detected by mere eyesight.

It is not a big deal if you spookt a hare. It will run away and search for a hiding place, and it will stay there for a while. The challenge is not to avoid spooking the prey but to figure out where it is hiding before it decides to return to normal state. Once you have found the hiding spot it will be simple to shoot it unless you get too close which will make it run away again.

Shooting the animal
You can track down Snowshoe hares by running around in populated areas and following tracks. Run until you find "Fleeing" tracks. A hare will always flee first when it hears you come. The fleeing tracks will be your sign for the animal being very close. They can easily leave up to 10 tracks before hiding again. Try not to chase a hare towards a hillside. Due to the lack of hiding objects there you might have to follow it for a very long time.

When you follow and the tracks stop, the hare is hiding very close to you. Sometimes it takes some time to find it, as it might have made a last sharp turn in the search for a good hiding spot. Use your binoculars or a weapon scope and scan the area. Often times you will receive spotting information in the upper right corner of the screen before you even see the animal itself. Don't rush that moment but rather take the time to find the animal. If you are within that spotting range, the chances for the hare to to flee are small. Just when you keep moving it might end up fleeing again.

If you can't see the hare, keep running around and listen for a running sound which you can hear quite well, then follow it again. With a little practice you can shoot fleeing Snowshoes, especially if you use a shotgun.