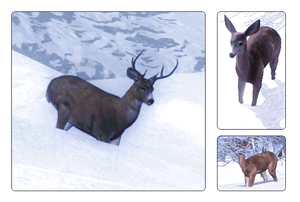 Introduction
Sitka Deer (not to be confused with Sika Deer) is a sub-species of the well established Blacktail Deer and made its appearance with the introduction of Whiterime Ridge. It comes with no surprise that much of hunting this species is similar to that of its before-mentioned relative.

Spawning
The Sitka Deer is a herd animal. The very most sightings will be groups of mixed genders. The most commonly seen group constellation is five females and two bucks, but you can also find others. If you find stray Sitkas, they could be from a group that was parted by spooking or getting stuck in certain territory or vegetation.

Clothing
Hunting Sitka in an arctic environment requires at least the Basic Arctic Outfit, which are free for you to pick up at the store. It is however recommended to wear Arctic camo clothes as the Sitkas have good eyesight.

Searching
Weight does correlate somewhat with the score. Follow tracks from heavy bucks. There is a chance that one of these males will have a decent score. If you hear a call no matter what gender, lure them towards you. The bigger the group the better the chance for a high scoring male.

Luring
Use the Deer Bleat or the Deer Grunt to lure Sitkas. Both callers have the same luring effect, and the effect is the same for both males and females. You may use Sitka Deer Scent Spray which lasts a lot longer than the caller, and lets you safely move into a hiding place or stand.

Field Judging
When you spot Sitka bucks, look for one with large antlers with long points. Soon you will be able to field judge the antlers and tell a small score from a big one. When luring in bucks, make sure to look out for other males before taking a shot on the first spotted.

Dealing with groups (herds, packs, flocks)
If you fancy shooting any gender, roam around and look for their tracks or listen for their calls. If you are after the big male, leave signs of females behind and keep going until you find the according presence of males. When you encounter a group, check the map and look for a good ambushing location. Call from a 30-50m (100-165 ft.) of your hiding spot or use scent spray if available, then move there and wait. If the group has a big male, it can be the first animal to react to the lure just as much as the last. It is therefore important to always be patient and try to spot all animals in the group before taking a shot. Spotting all animals also has the positive side effect of increasing your spotting skill for this species.

Retrieved from "https://thehunter.fandom.com/wiki/Sitka_Deer?oldid=17176"
Community content is available under CC-BY-SA unless otherwise noted.