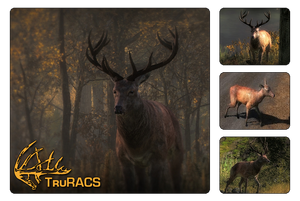 The red deer (Cervus elaphus) is one of the largest deer species. The red deer inhabits most of Europe and eastern Asia. Genetic evidence indicates that the red deer (Cervus elaphus) as traditionally defined is a species group rather than a single species, although it remains disputed exactly how many species the group includes. It is commonly accepted that the slightly larger wapiti, native to North America and eastern parts of Asia represents a distinct species besides red deer.

Red deer have different colouration based on the seasons and types of habitats, with grey or lighter colouration prevalent in the winter and a more reddish and darker coat in the summer. Most European red deer wear a reddish-brown summer coat, and some individuals may have a few spots on the backs of their summer coats.

Introduction
The Red Deer is a widely found deer species in European and other countries and is only exceeded in size by the Moose. It is therefore an always welcomed trophy in every hunt. For hunters specifically looking for this majestic animal with its distinctive antlers, they best roam the southern and western parts of the Hirschfelden reserve. Other than the Red Fox no animal will take their attention which makes this a great area for Red Deer hunting. Interestingly the very same is true for the Val-des-Bois reserve. South-west, many red deer, some foxes. Great areas!

Spawning
Red Deer females spawn in groups of five or six hinds. If you find less than that the group was split by spooking or path finding difficulties. The stags can travel alone or in a group of five hinds. If you encounter more than one stag in the same area, they have crossed paths randomly. They will likely come both to a call.

Searching
It is worth following tracks of heavy stags, because their weight/score relation is a bit higher than for some other deer species. The top scoring bulls are all above 200kg, most even over 210kg. Their roaming speed is high and they can spot you well. It is a bit harder to follow them crouching compared to other male deer. Because many herds have a bull in them you should always call any herd you locate towards you, and then check it out entirely for a good scoring male.

Luring
Use the Red Deer Caller to lure this deer. The caller has the same luring effect for both males and females. In addition it also provokes vocal responses. Use this caller regularly and listen out for any activity. Responses can be from males and females. Call the animals in short frequencies. You cannot over-call. Always be aware of your environment, the animals can spread out and surprise you by walking in from a side. Also in dense areas you might be luring another herd without noticing. Try to lure the animals out of dense woodwork. The red deer blends nicely with the fall environment of Hirschfelden. You run the danger of spooking them, or a nearby Fox or Roe Deer. Also dense vegetation makes a safe shot harder if you have no clear line of sight.

Field Judging
Look for long beams with a wide spread, with many ends. The largest Red Deer bulls have exaggerated antlers. If you feel you are seeing what would be a major score in real nature, the bull might still score medium to low. Once you have seen one of those incredibly large set of antlers, you won't be looking for anything else.

Following a spooked Red Deer is hard. They encounter you from far away. It is essential to constantly glass the area. If you crouch after a high scoring stag and finally find a roaming track after many fleeing tracks, you have likely come too close already and spooked it again. 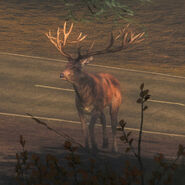