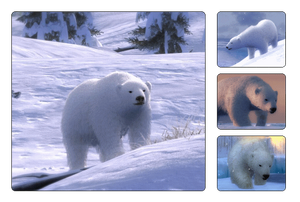 The polar bear (Ursus maritimus) is a carnivorous bear whose native range lies largely within the Arctic Circle, encompassing the Arctic Ocean, its surrounding seas and surrounding land masses. It is a large bear, approximately the same size as the omnivorous Kodiak bear (Ursus arctos middendorffi). A boar (adult male) weighs around 350–700 kg (772–1,543 lb), while a sow (adult female) is about half that size.

Although it is the sister species of the brown bear, it has evolved to occupy a narrower ecological niche, with many body characteristics adapted for cold temperatures, for moving across snow, ice, and open water, and for hunting seals, which make up most of its diet. Although most polar bears are born on land, they spend most of their time on the sea ice. Their scientific name means "maritime bear", and derives from this fact. Polar bears hunt their preferred food of seals from the edge of sea ice, often living off fat reserves when no sea ice is present. Because of their dependence on the sea ice, polar bears are classified as marine mammals.

Because of expected habitat loss caused by climate change, the polar bear is classified as a vulnerable species, and at least three of the nineteen polar bear subpopulations are currently in decline. For decades, large-scale hunting raised international concern for the future of the species but populations rebounded after controls and quotas began to take effect. For thousands of years, the polar bear has been a key figure in the material, spiritual, and cultural life of circumpolar peoples, and polar bears remain important in their cultures.

When hunting Polar Bear, the hunter must be careful not to get too close. The animal may charge the player. If the animal hits the player, the player is put into the Player Hurt state.

There is no attractant for the Polar Bear.

Introduction
When introduced to the Evergreen Hunting Reserve, the Polar Bear was a protected species with only few time windows when hunters would be allowed to shoot this massive bear. Over time this limitation was lifted and the Polar Bear is now huntable at all times just like any other creature in the EHR. It separates itself from the other bear species in that in can be tricky or even impossible to get to, when it marches along the ice floes on the ocean. Also it attacks much faster and from further away, making its habitat areas more dangerous to roam for any hunter. Also as opposed to other bears, it cannot be baited.

Spawning
All Polar Bears travel alone. You might see several of them at once when on the ice floes, but along the snowy shores of Whiterime Ridge multiples of these bears in one place will be seldom. The Polar Bears can spawn both on the ice masses as well as on the main land.

Clothing
The Polar Bear might well have good eyes and ears, but its fearlessness overrides any senses for running away. Few of them will run just because a hunter approaches. It is therefore pointless to worry about camo clothes.

Searching
Around the northern half of Whiterime Ridge there are many ice floes on the ocean near the land. Roaming the shores and spotting these ice masses can help finding the Polar Bears. They will stay on the ice for the most part and only sometimes swim or walk to the shore. They can however also be found on the main land. These will rarely travel out onto the floes, but it can happen. If Polar Bears swim to the floes it can be difficult or impossible to follow them. Note that if playing the game with "Scene Complexity" set to "Low", there will be a lot less floes, and also there will be no bridges to enter the ice masses. The bears are then even less likely to travel between ice and main land.

Polar Bear make calls that your HunterMate can identify. In areas with few other animals, receiving calls from the Polar Bear is quite common. This is the easiest way to locate them. Constant spotting ahead on the main land can also prove useful, the massive animal has a yellowish color that is pretty different from the snow that will let you see it in the open.

Luring
There is no caller or scent spray available for the Polar Bear and baiting is also not possible.

Field Judging
After you have been watching them for a while you should be able to tell a heavy Polar Bear from a light one. However the score is calculated from the dimensions of the skull. It is not possible to tell a larger skull from a smaller one.

The Polar Bear is among the most aggressive animals in the game. Running up to it will only in few cases scare it away. In most cases the bear will attack you. It attacks from further away than the other bear species. The attacking pose is obvious and the growling loud enough not to oversee and overhear.

Shooting the animal
The Polar Bear is not hard to hit as it rarely spooks but mostly walks and stands sill. You can almost walk up to it, just beware from being overrun. Make sure to bring the largest caliber rifle from your gun rack though. Even with a powerful rifle or a muzzleloader you still need to place the shot well. A good spot to aim for is the area above and a bit in front of the front leg. In theory all permitted weapons can be used with ease, however some of them will not kill a Polar Bear in one shot.

If a missed bear runs away, most of the times it will return to walking and you can easily catch up. If you hit it badly however it will continue fleeing at top speed, and even running will not let you catch up. At this point the Polar Bear proves its fine senses and can become one of the trickiest animals to follow. You will see it spook from far out time and time again. It is then advisable to crouch after it and continuously spot the area. Unlike in other reserves and with other species, you should keep going after it pretty soon as the tracks in Whiterime Ridge ridge have a shorter life span than in smaller reserves, lest you lose the trail.

Thanks to Hardtree for this map. It shows the polar bear occurrences in the north of Whiterime Ridge. 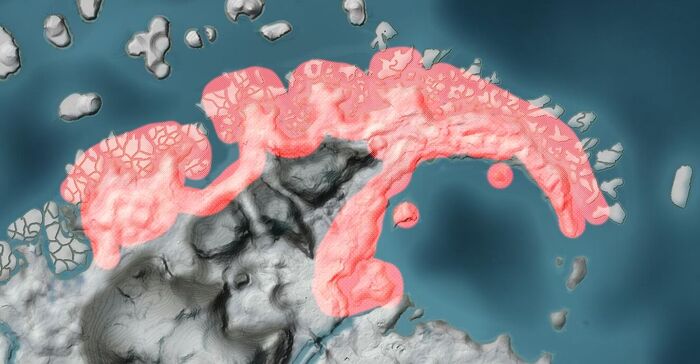