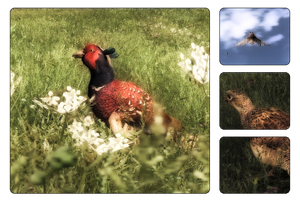 The Common Pheasant (Phasianus colchicus), is a bird in the pheasant family (Phasianidae). It is native to Russia and has been widely introduced elsewhere as a game bird. In parts of its range, namely in places where none of its relatives occur such as in Europe (where it is naturalized), it is simply known as the "pheasant".

It is a well-known gamebird, among those of more than regional importance perhaps the most widespread and ancient one in the whole world. The Common Pheasant is one of the world's most hunted birds; it has been introduced for that purpose to many regions, and is also common on game farms where it is commercially bred. Ring-necked Pheasants in particular are commonly bred and were introduced to many parts of the world; the game farm stock, though no distinct breeds have been developed yet, can be considered semi-domesticated.

The Pheasant Callers does not attract, but provoke calls from male pheasants.

Labrador Retriever
Add a photo to this gallery

Introduction
The challenge of hunting this bird is not the tracking, stalking and ambushing like for so many other animals in the game. Approaching them is relatively easy as you will see below. The real deal is about shooting long-feathered roosters in the air.

Spawning
Pheasants will always spawn in groups of up to nine birds. If you find single birds, they will be from a flock that was parted by spooking or by getting stuck in terrain or vegetation. Unlike waterfowl, pheasants only fly when spooked. Otherwise they walk across the meadows and fields and you can find them feeding.

Clothing
The pheasant has a very good eyesight and will detect you walking around. You can consider using Sneaky 3D Summer Camo at Logger's Point or Sneaky 3D Fall Camo at Hirschfelden to reduce your visibility, however hunting the pheasant is not about stalking. Better adjust your clothing to the other animals in the reserve.

Searching
The relation between weight and score is quite strong. It is worth increasing your tracking skill for pheasants and following tracks of heavy males. Any track that suggests a weight above 2.6kg can result in a nice big bird.

Luring
It is not possible to lure a pheasant towards you. Using the Locator Caller will provoke responses from males. Male pheasants can also cry on their own, which gives away their position. Females do not have a vocal sound.

Field Judging
When spotting them in the field, look for long tail feathers. The spurs are too small to be judged from the bare eye.

Senses
The pheasants have no sense of smelling. Scent Eliminator will not make a difference so don't waste any on them. Their eyesight however is as sharp as that of Turkeys, and they will detect you from far. The same goes for hearing, which is again exceptionally good.

Ducking / fleeing behavior
You can either approach a flock crouching, or you can just run to them. If you crouch they will not detect you until you are very close. If you run, they will duck right where they are and stay immobile in an open field. In dense vegetation they will not dodge but run away and fly at the earliest opportunity. Sometimes in open fields you can see females or particularly large males flying away instead of ducking with the rest when scared. Hidden pheasants are not easy to detect in high grass. They are easier to detect from further away where the grass around them is not rendered anymore. If you are very close and cannot see the hidden birds, use a magnification device to scan the grass. If you are looking at a hidden pheasant, a white outline will give away their position. As long as you stay very close to them or are in movement, the pheasants will remain hidden. Use this time to spot all birds to level up your Spotting Skill for this animal, but also to make sure you find the largest bird. Any bird you come too close to during this process, i.e. about 1m / 3ft. will fly away without scaring other birds. Spooked pheasants will alarm and spook other animals though when seen, whether they run or fly.

Shooting the animal
Approach the flock and look at all males and pick the one you feel is the largest. Shooting multiple birds is well possible for an experienced shooter. Use the Whistle key (default: "F") to flush them off the ground. You can also walk or run close, and close-by birds will fly up in the air. Always shoot pheasants in the air. Ground shots will not count for competitions and leaderboards. A pheasant will in most cases rise and fly straight ahead, unless the terrain makes it turn. It is worth paying attention to the direction the bird is facing before you flush it. Make sure it is facing open fields and not forests. In case you miss the shot, you will easier find the bird in open areas. Pheasants cannot fly over rivers. They will turn around, or land and run into a different direction, or land and run over a water crossing. It is not possible to flush pheasants in certain terrains, most noticeably in the forests. A spooked bird will just run, but you can run after it. Keep your shotgun ready for when it eventually takes off.

You can erase an entire flock of pheasants on the ground within a 1-2 minutes with a Bow, the .22 Air Rifle or the .22 Pistol. Observe the birds which all should be ducked. Wait until they get up and start walking. Shoot one and they will all duck again. Wait until they get up again, shoot the next and wait. Repeat this until the entire flock is wiped out. Sometimes a single bird will not play along and flee during this process, just let it go.

If the animal flees
If you spook the animal of your desire, follow the tracks crouching. Use your optics and try to spot it, and also look for tracks or vocal signs. Do not go too fast. The animal can stop fleeing abruptly and return to roaming, and the roaming can be in any direction including coming right back at you. If you end up bumping into the animal it will flee again. Take your time. If the animal is worth it, a few more minutes will pay off. Spooked pheasants calm down rather quickly. Listen for their call or use the lure to trigger a call. Do not pick up any other tracks when searching a particular pheasant. It should remain your currently tracked animal. When you hear a call, identify it with the HunterMate. If the call is immediately identified, you know that this is your bird. If it says this is the call from another bird and requires your confirmation to switch to the new animal, cancel the identification in order not to lose your current pheasant. If other pheasants keep calling and you cannot find your bird, consider chasing them away or shooting them with a silent weapon. Do not shoot at other animals, or your trophy bird might just fly further away into a direction you have no idea of.

Birds on the ground can be shot with Bows and help you practice bow shooting. Shooting them airborne however takes a lot of practice. Lead the shot and aim for the head, and you will find yourself succeed sooner.

If you want to shoot pheasants with a pistol, go behind them and flush them. Let them reach a steady gliding before you shoot. Rising birds tend to make unpredictable changes in height, which is a recipe for missing. 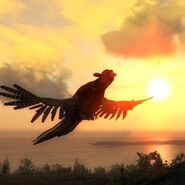 Retrieved from "https://thehunter.fandom.com/wiki/Pheasant?oldid=17185"
Community content is available under CC-BY-SA unless otherwise noted.