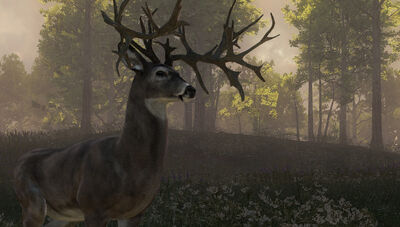 Introduction from the Developers

This is a feature that has been on the wishlist for a looong time now! Perhaps it's something that will also be more appreciated by our long-time players and more experienced irl hunters. The antler system is one of the most complicated features in theHunter, and also one that pretty much every player has strong opinions about. And perhaps rightly so, as the antlers is a part of the very heart of the game. In order to improve the production value (how much time and money something costs to implement), we've made an effort to slightly simplify the system that we use for handling non-typical antlers and have come up with a solution that made all this possible. Future additions to the range of non-typical antlers should not be as complicated and time consuming to add and modify as the typical antlers. Non-typical antlers in theHunter will not be as common as the typical ones (as they are not in reality). But they will not be nearly as rare as some of our albino and melanistic animal variations. All players should have a chance to enjoy an occasional non-typical trophy!