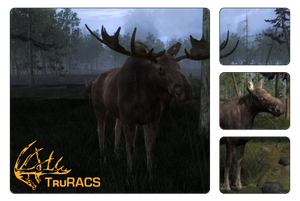 The moose (North America) or Eurasian elk (Europe) (Alces alces) is the largest extant species in the deer family. Moose are distinguished by the palmate antlers of the males; other members of the family have antlers with a dendritic ("twig-like") configuration. Moose typically inhabit boreal and mixed deciduous forests of the Northern Hemisphere in temperate to subarctic climates.

In North America, the moose range includes almost all of Canada (excluding the arctic), most of Alaska, northern New England and upstate New York, the upper Rocky Mountains, northeastern Minnesota, Michigan's Upper Peninsula, and Isle Royale in Lake Superior. In Europe, moose are currently found in large numbers throughout Norway, Sweden, Finland, Poland, and the Baltic States, with more modest numbers in the southern Czech Republic, Belarus and northern Ukraine. They are also widespread through Russia on up through the borders with Finland south towards the border with Estonia, Belarus and Ukraine and stretching far away eastwards to the Yenisei River in Siberia. Summary by Wikipedia.org

When hunting Moose, the hunter must be careful not to get too close. The animal may charge the player. If the animal hits the player, the player is put into the Player Hurt state.

Introduction
The Moose is the largest animal of the deer species in the game. A bull with massive antlers is always an exceptional trophy in your collection. Their roaming speed is high. It relatively easy to follow them crouching compared to some other deer, and they are not very scary. You can quickly find many Moose when starting at the Trapper's Rest Lodge on Redfeather Falls and going up the west side of the reserve. This is also a good place for Whitetails so be wary of these and make sure you do not spook them and flush the moose you are after.

Spawning
Moose bulls and cows can spawn and travel alone, but you can also find groups. Especially in the Hemmeldal reserve bulls can be accompanied by one or two cows.

Searching
The weight to score relation is not very strong. You can find bulls with large antlers that aren't that heavy, and vice versa, very heavy bulls that score very low. The maximum weight is 620kg. If you find tracks from a heavy bull don't miss out on following it. The moose is not very scary. You can easily catch up and check it out. Just look out for other bulls and cows when luring them.

Luring
Use the Moose Caller to lure the Moose. This caller has the same luring effect for both males and females. In addition it also provokes vocal responses. Use this caller regularly and listen out for any activity. Responses can be from males and females. Note that the caller has a rather short luring effect on the moose. Call the animals in short frequencies. They can lose interest quickly otherwise, abort their strolling towards you, and walk away. You cannot over-call. You may also use Moose Scent Spray which lasts a lot longer and lets you safely move into a hiding place or stand.

Field Judging
The Moose antlers can get massive. The difference from the smallest antlers to the biggest ones is immense. Field judging moose is relatively easy. If you ever spot a Moose antlers that could serve as tractor wheels, make sure to stop what you are doing and go after it. Aggression
This species is one of those that can attack you. This happens if you shoot at it or when you got really close to it. The animal will start an aggression animation and look fiercely at you. It can also makes growls that you wouldn't normally hear. If you see the animal doing this you have a chance to run away or get ready for a shot. Sometimes the animal will abort the attack and flee. It can also happen that an animal will start fleeing but then stop and turn around for an attack. If you are very close to a species capable of attacking, have a firearm ready for your defense, or back out. You can also be completely blindsided by an animal that you did not realize it was there. When attacked, you will be hurt and will need to either heal yourself with a First Aid Kit or fast travel to a tent or lodge.

The large Moose is a great target for bow hunters. Badly shot arrows however might not hurt the animal enough and you could end up having to track the shot animal for a long while. Also after a bad shot, the Moose might attack you. You will not be able to react fast enough with a bow, so plan your first shot well and only shoot at the animal when it stands still.

From behind, a Moose is very hard to take down even from close. A good way though is shooting the backside of the head with a rifle. The head is a bit above the shoulders and sticks out just enough for you to aim at. The Moose has a lot of head movement and a good shot placement takes patience. If you hit though, the bullet will easily penetrate the skull and reach the brain for a clean take-down.

If the animal flees
If you spook the animal of your desire, follow the tracks crouching. Use your optics and try to spot it, and also look for tracks or vocal signs. Do not go too fast. The animal can stop fleeing abruptly and return to roaming, and the roaming can be in any direction including coming right back at you. If you end up bumping into the animal it will flee again. Take your time. If the animal is worth it, a few more minutes will pay off. Spooked Moose are easier to find than many other deer species. 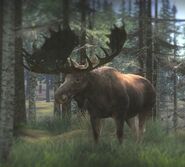 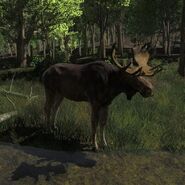 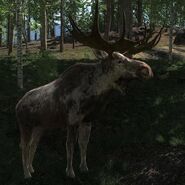 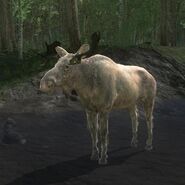 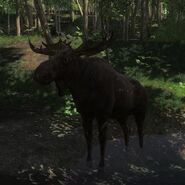 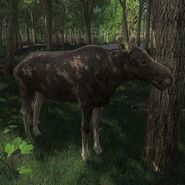 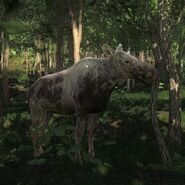 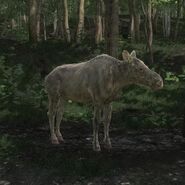 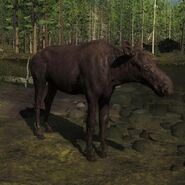