Event related missions can also become available for a short time, e.g. a mission was available with the release of Dogs. Such event driven missions also award trophies in addition to the Gm$. Once these missions disappear they can no longer be activated.

To activate a mission go to MISSIONS. For a full walk-through on how to activate missions see Activating Missions. Missions can be activated while you are playing the game. Missions cannot be deactivated.

The missions can only be completed once. If you wish to repeat them, you can reset all missions. The according service must be purchased in the store as you will again earn the Gm$ for all completed missions.

If you need help with any of these missions, just ask for help in the Forum. You can also find hints to some of the missions on this page. All travel missions for example show maps with the locations to go to.

Important note: You can complete missions with animals that are shot by other players. If you do not own a certain weapon required for a mission, ask someone to shoot the animal for you in multiplayer mode and let you join the game and harvest the animal.

The Boone And Crockett Club Missions

While you are doing these missions you will have to travel to some remote places a few times, e.g. Solitary End. Consider placing tents in these places the first time you visit so you can fast travel the next time you need to go there. You can remove the tents again during the last mission of after completing all missions. 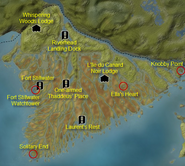 Blue boat
Add a photo to this gallery

Retrieved from "https://thehunter.fandom.com/wiki/Missions?oldid=16984"
Community content is available under CC-BY-SA unless otherwise noted.