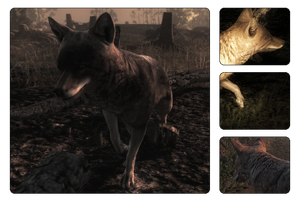 The coyote (pronounced /kaɪˈoʊtiː/ or /ˈkaɪ.oʊt/) (Canis latrans), also known as the American jackal or the prairie wolf, is a species of canine found throughout North and Central America, ranging from Panama in the south, north through Mexico, the United States and Canada. It occurs as far north as Alaska and all but the northernmost portions of Canada.

Introduction
The Coyote is one of the early animals of the game. It appears very large compared to the real animal, yet that doesn't reduce the fun hunting them. The southern island of Whitehart Island is an ideal spot. Start at the Southcliff Lodge and walk north. Plenty of Whitetails and some Elks will not be able to hide the elusive Coyotes from you. When this animal was initially introduced in the game, there was no caller available. The addition of a caller later on has made the hunt much easier. Nevertheless a few things are good to know before hitting the woods in the pursuit of finding the big dog.

Spawning
Coyotes can spawn alone in some cases. Mostly they travel in mixed groups of any number up to eight. There are usually more females than males in these groups. Often times when you find a single coyote, it might have been separated from its band through spooking or getting stuck in a solid object.

Clothing
The Coyote has a good eyesight and can see you from far. You may consider using Sneaky 3D Summer Camo clothes to reduce your visibility. Sneaky 3D camo clothes provide no scent or sound reduction though. Coyotes have very good senses for hearing and especially smelling. Consider additional protection with Scent Eliminator. Also use Face Paint or a Ghillie Suit, but remember the loudness of this suit and reduce your movements to a minimum.

Coyotes have among the best smelling abilities in the game. When around coyotes you should always apply scent eliminator even if not necessarily upwind. The situation and track path can change quickly before you find yourself ending up in the wind upstream of the animal(s) you are tracking.

Searching
The score of the coyote is its weight. Carefully follow tracks of a "band" (or "pack") that includes heavy males. If you Tracking Skill is not high enough yet to judge the animal weights, follow all groups. Most bands will have a good size dog in them. The skill will build up quickly when tracking entire packs. Glass ahead often when the Huntermate tells you that you have come close. Due to its bright fur coyotes can be seen a bit better then the other animals. Many times when you come in reach you will get a call from one of the coyotes in the group. The chance that the next call is from an coyote in the tracked group increases with every additional animal in the group. If you walk or run into fleeing tracks and the estimation predicts a high weight, take the time to stalk that dog.

Luring
Once you are aware of coyotes in the area, use the Predator "Jackrabbit" Caller to lure them to you. They tend to come in a straight line to your call, one after the other. Move backwards and lay down so they cannot detect you. It will not take very long until they arrive, so don't waste any time in the calling location. Coyotes trot to the call. When they arrive, they circle the spot you called from. In that process, one or several of the coyotes can come closer to you than you expected before returning to where they are supposed to end up. Make sure to back up at least 30-35m if you can. If you keep this distance, you can maneuver with your weapons and also get up from a prone position for a bow shot without being detected. Once you are up, don't waste too much time for the shot. Don't rush the shot, but be quick. It can take some practice until you have a good feeling for what is a safe distance for staying undetected while still being able to place a deadly shot.

Field Judging
If your Spotting Skill for this species is high enough, you will get a weight and score estimation. Always check out as many as you can, but don't waste too much time doing this. Check out the visually largest dogs, and then shoot the one with the highest score estimation in the pack.

Remember the 30-35m safety distance. A band of coyotes can build a very tight cluster around the calling location, so it is not always easy to hit the correct coyote, especially if you need to identify them one by one. If you cannot get information on all of them, shoot the one animal that appears the largest. You may also consider using Buckshot ammo and hit multiple coyotes at once when they pile up in front of you.

A spooked single Coyote or a band thereof won't run that far. Coyotes are less scary than the Red Foxes and following them is a bit easier. The safest method to regain a lost dog is to wait a while, then slowly follow and hope for a call from it. You can then know it has calmed down again and can be lured back to you. Be aware though that low scoring animals such as females might be closer to you than the big dog you are tracking down, and they could see you again and cause another flush wave. Glassing around is therefore important also in this case. Also if you call an animal back to you after it has returned to normal state, be aware that now many of the previously scattered coyotes will also come in stages back at you. Use a bow to eliminate them one by one, or try to hide until the one of your desire shows up. Coyotes that have arrived sooner at the calling location bear a risk of detecting you so keep a safe distance.

Check out this guide from Flanker305.