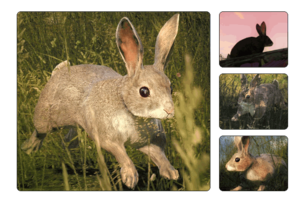 Cottontail rabbits are among the 17 lagomorph species in the genus Sylvilagus, found in the Americas. In appearance, most cottontail rabbits closely resemble the wild European rabbit (Oryctolagus cuniculus). Most Sylvilagus species have stub tails with white undersides that show when they retreat; giving them their name, "cottontails". This feature is not present in some cottontails, nor is it unique to the genus.

The genus is widely distributed across North America, Central America, and northern and central South America, though most species are confined to particular regions. Most (though not all) species live in nests called forms, and all have altricial young.

There is no attractant for the Cottontail Rabbit.

Introduction
The cottontail rabbit does not make sounds loud enough to be detected as clues on the HunterMate, nor does it respond to any lures. This can make rabbit hunting quite frustrating if you do not know some very specific details about its behavior. Due to its small size and the high grass in areas where it is typically found it can be very difficult to detect, and your first encounter is likely to be seeing it hopping away from you or finding a fleeing track.

Multiple tactics can be used in this situation such as staking out the area where the rabbit is believed to be hiding and picking it off with a precision weapon such as a bow or air rifle once it comes out or to simply stomp around in the hiding area hoping to flush the wabbit like a Pheasant, taking it with a shotgun. There may be other tactics that EW hasn't thought of, but that will be for the players to figure out.

In contrast to other species it is not a big deal if you spook a rabbit. Once it has spooked it will hop away and search for a patch of thick vegetation (shrubs & bushes) where it can hide and it will stay there for a while before being able to be spooked again. A resourceful player can exploit this by noticing the direction where the rabbit runs and then methodically search bushes and shrubs in the area to find the rabbits hiding place. The challenge is not to avoid spooking the prey but to figure out where it's hiding before it decides to relocate. Once you've found the hiding spot it will be a simple case of "shooting a sitting duck" unless you get too close (basically stepping on it) which will make it flush out of hiding just as the pheasants do.

Rabbit make movement sounds that are at max volume within 16 meters. After that the sounds quadratically decrease to a low volume at a distance of 25 meters. The sound totally dies off at about 30-40 meters.

Spawning
Many Cottontail Rabbits spawn very close to each other. They will hop around but will always stay within their realm. You will not find a long trail leading away from the original spawning location unless the animal was fleeing.

Luring
There is no attractant for the Cottontail Rabbit.

Searching
The rabbit is very territorial. They stay within a 100m radius of their spawn point. They may still run out of their territory if forced to by the player, but they will always return when left alone after a while. The rabbits only run about 40m from the location of threat and then hide in the first shrub/bush they find. Be careful when you find a track that is 1 hour old. There might be another track from the same rabbit next to it that is only very recent, because of the territorial behavior.

If you are after the big trophy follow tracks of heavy females (!). A high Tracking Skill for this animal is inevitable, so read all tracks you can find. Females can reach 2kg (2000 grams = scoring 2000) and are heavier than the males which only reach 1800 grams. The weight is the score, finding a heavy rabbit will mean finding a high score. Glass the area often.

Shooting the animal
Rabbits tend to hide if they hear you. You can flush rabbits (default key: "F") just like pheasants and waterfowl. The rabbit's flush distance is 5-10 meters. It is the distance at which the rabbit decides to flee when hiding. If the rabbit finds a shrub or bush to hide in after it has been spooked, it will not leave the hiding place until it feels that it is safe to leave or the player comes very close. The best chances for hitting fleeing Cottontails is if you use a shotgun. For "instant" kills there is a chance that the rabbit will jump into the air before dying (special kill animation unique to this animal).

The rabbit is the "best" animal in the game for run and gun tactics. By running around in dense areas and following tracks, you will find many rabbits. Run until you find "Fleeing" tracks. A rabbit will always flee first when it hears you come, so the fleeing tracks will be your sign for the animal being very close. They leave somewhere between 3 and 6 tracks before diving under. When you follow and the tracks stop, the rabbit is hiding very close to you. Sometimes it takes some time to find it, as it might have made a last sharp turn in the search for a good hiding spot. If you can't find the rabbit, keep running around and listen for a running sound which you can hear quite well, then follow it again. This video shows how it works.