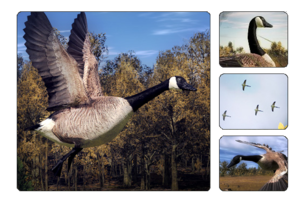 The Canada Goose (Branta canadensis) is a goose with a black head and neck, white patches on the face, and a brown body. Native to arctic and temperate regions of North America, it also occasionally migrates to northern Europe, and has been introduced to Britain, New Zealand, and other temperate regions. According to the Oxford English Dictionary, the first citation for the 'Canada Goose' dates back to 1772.

This species is native to North America. It breeds in Canada and the northern United States in a variety of habitats. The Great Lakes region maintains a very large population of Canada Geese. Canada Geese occur year-round in the southern part of their breeding range, including most of the eastern seaboard and the Pacific coast. Between California and South Carolina in the southern United States and northern Mexico, Canada Geese are primarily present as migrants from further north during the winter.

Introduction
Hunting waterfowl is quite different in that regard, and the right equipment is more important here than for animals you can track down or lure out of the woods. The Canada Goose is, unlike many other species, not really tracked and spotted. When starting a hunt, some geese can sit on ground near you, but mostly they appear in groups on the sky and are to be lured down so they can be shot. The Canada Goose leaves track on the ground when roaming around, but the tracking skill is not of much benefit as most of these birds will be shot by luring from the sky, not by tracking in the field. As opposed to the Mallard Duck, geese can sleep on the ground.

Field judging
It is not possible to field judge geese. Males and females cannot be differentiated. Heavier birds will be a bit larger, but the difference is not recognizable by the player. Shoot all birds in reach.

Spawning
Waterfowl spawns outside the map and flies over the reserve. After leaving the reserve, the same birds can reappear again in another flock later on. You may recognize this yourself when you spot a rare bird such as a Black Hybrid Mallard multiple times. Waterfowl flocks are always mixed groups of males and females. Duck flocks can also be a mix of different species, especially as your hunt progresses to an hour or more.

Preparing the hunt
Find an area where you can often see high flying flocks. Birds will only land if the landing target is big enough for them to land on, so you want to position yourself very close to big water places (ducks) or fields (geese). Consider placing a tent right in this area. This way you can start your hunts right where the action happens! Now make your position attractive! Your goal is to get them to break from high flying flocks and land near you. The birds are attracted to Decoys of their kind as well as the callers mimicking their own sounds. Using both at the same time has the best effect. The decoys imitate birds sitting on the water surface or corn field. When you now add their typical sound with the callers, the illusion is perfect for them and they pay you a visit. Set out the decoys a few meters apart from each other. 24 decoys have the best attraction effect. Setting up more in the same area does not increase the attraction of the area any further. Learn more about the mixing of different duck decoys here.

Waterfowl can see your movements from far away. You can lie flat on the ground, or you can consider setting up a Waterfowl Blind. Three people can wait in such a blind for the birds to approach. In the blind, you don't have to lay on the ground but can crouch. The blind nicely protects your movements from being spotted by the approaching birds, but also against other species that might be roaming the area.

Luring
Ducks and Geese can spawn on the ground or come flying in groups about 60m up. Scan the skies for incoming flocks. You will hear a quacking or honking of approaching flocks. Once you spot a flock, start calling with the appropriate long range caller. The birds are hard to predict how they will behave when they spot decoys or hear calls. In the worst case an entire flock might just pass without taking notice. However in most cases you will see some birds detaching themselves from the group and starting to glide into your area. They can come flying right to your call, or they can seek a feeding place further away from you.

Some birds might have been successfully lured away from their flock, but they decided to land outside your shotgun range. With the species specific short range caller you can now imitate their feeding sound. This will lure birds to where you are. So combine the callers! The long range caller increases the chance of them breaking off from the large flock and beginning to circle the area where the call originated. However without using the short range caller there is no guarantee that they will fly or land close enough to your location for a shoot. In this case they will choose a random location where there is enough space on water or land. They can land next to you or quite a bit further away. Using the short range caller basically increases the chance of you getting a shot at them.

Differences in luring geese vs. ducks:

Shooting Waterfowl
The constant movements of swimming ducks or walking geese can make shots with a bow or crossbow a nice challenge. Shooting birds with bows further out will not spook nearby fellows. The real deal however is to shoot the birds in the air! Whistle with the "Make sound" key (default: F; see Controls) to flush the birds just as you do with the pheasants. You will receive a score for birds shot on the water ("G" score), but only birds shot in the air ("A" score) will count for competitions, leaderboards and missions. So make good use of your shotguns! The constant supply of new flocks will need you to be equipped with plenty of Birdshot ammunition! Shot waterfowl will drop dead to the ground or water surface. In water they might float to the other side of a river or lake, but you should always be able to retrieve them. Consider using a retriever dog for collecting shot birds. 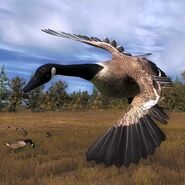