The European Rabbit shares many traits with its North American cousin but there is one major difference – Burrows. When a Cottontail spooks it tries to find thick vegetation to hide in, but the European Rabbit has taken it a step further by digging elaborate burrow systems to which it can retreat when threatened.

In theHunter European Rabbits live in colonies tied to burrow systems, randomly generated throughout the fields of Val-des-Bois. It is rare that a group of rabbits strays farther than 100 meters away from their burrows, which makes them easier to locate than other animals. The problem is though, that when spooked they retreat into a nearby hole and thus become unreachable by would-be hunters. The rabbits will eventually surface from a randomly selected hole in the burrow system. Patience and enough ammunition are will lead to success. 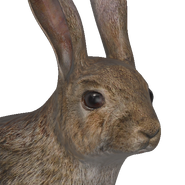 European Rabbit
Add a photo to this gallery
Retrieved from "https://thehunter.fandom.com/wiki/Burrows?oldid=17253"
Community content is available under CC-BY-SA unless otherwise noted.