The bobcat (Lynx rufus) is a North American cat. Containing 12 recognized subspecies, it ranges from southern Canada to central Mexico, including most of the contiguous United States. The bobcat is an adaptable predator that inhabits wooded areas, as well as semidesert, urban edge, forest edge, and swampland environments. It is about twice as large as the domestic cat. It has distinctive black bars on its forelegs and a black-tipped, stubby tail, from which it derives its name. Though the bobcat prefers rabbits and hares, it hunts insects, chickens, geese and other birds, small rodents, and deer. Like most cats, the bobcat is territorial and largely solitary, although with some overlap in home ranges. 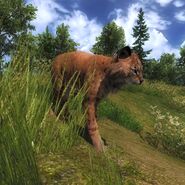 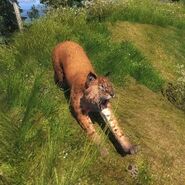