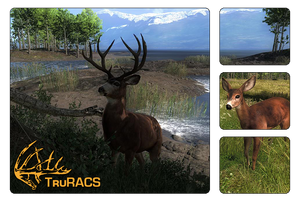 The black-tailed deer was once believed to be a subspecies of the North American mule deer (Odocoileus hemionus), however, recent DNA testing has proven this not to be the case. In Valerius Geist's book Mule Deer Country he explains that by testing the mitochondrial DNA of the three species (blacktail, whitetail and mule deer), researchers have now determined that it was the mating of whitetail does and blacktail bucks that gave rise to the mule deer.

Introduction
You cannot miss the Blacktail Deer if you start at the Causeway Lodge in the Whitehart Island reserve and head west. The Blacktails are almost exclusive there. Some deer can sleep during the midday hours, but even then you will come across plenty of activity. The only other animal competing for your attention here is the Roosevelt Elk. You will not regret if you take the necessary time and walk to the northern parts of Redfeather Falls. You can fast travel to the campsite there or to a tent that you placed there earlier. Spotting can be a challenge, as in some areas you have a good distance view on the Blacktails, especially in the swamps. Luring them however and planning a shot is relatively easy compared to the thick woodwork of Whitehart Island.


Spawning
The Blacktail Deer is a herd animal, however you can also find single bucks. Blacktail bucks can travel alone, in groups of 2-3 bucks, or along with other males and females in larger herds. Any group constellation will not exceed 3 bucks. The does start as a group of 5 or 6, and they can travel along with or without bucks. If you find stray females, they could be from a group that was parted by spooking or getting stuck in certain territory or vegetation.

Searching
Weight does correlate somewhat with the score. Follow tracks from heavy bucks. If you find tracks from a group of bucks, always follow those. There is a chance that one of these males will have a decent score. If you hear a call no matter what gender, lure them towards you. It could be a single Blacktail or a group of up to eight of them. The bigger the group the better the chance for a high scoring male.

Luring
Use the Deer Bleat or the Deer Grunt to lure Blacktails. Both callers have the same luring effect, and the effect is the same for both males and females. You may use Blacktail Deer Urine Spray which lasts a lot longer than the caller, and lets you safely move into a hiding place or stand.

Field Judging
When you spot Blacktail bucks, look for one with large antlers with long points. Soon you will be able to field judge the antlers and tell a small score from a big one. When luring in bucks, make sure to look out for other males before taking a shot on the first spotted.

Dealing with groups (herds, packs, flocks)
If you fancy shooting any gender, roam around and look for their tracks or listen for their calls. If you are after the big male, leave signs of females behind and keep going until you find the according presence of males. When you encounter a group, check the map and look for a good ambushing location. Call from a 30-50m (100-165 ft.) of your hiding spot or use scent spray if available, then move there and wait. If the group has a big male, it can be the first animal to react to the lure just as much as the last. It is therefore important to always be patient and try to spot all animals in the group before taking a shot. Spotting all animals also has the positive side effect of increasing your spotting skill for this species.

Blacktail Deer with Non-Typical Antlers can occur but are rare to find.