The American black bear (Ursus americanus) is North America's smallest and most common species of bear. Black bears are omnivores, with their diets varying greatly depending on the season. Black bears typically live in largely forested areas, but do leave forests in search of food. Sometimes they become attracted to human communities because of the immediate availability of food.

When hunting Black Bear, the hunter must be careful not to get too close. The animal may charge the player. If the animal hits the player, the player is put into the Player Hurt state.

Introduction
If you enjoy hunting Black Bears you are best off roaming the northern most parts of Redfeather Falls. There is an abundance of them, sharing the environment with Blacktail Deer and the occasional Moose and Elk. The Black Bear is not easy to follow and can be a good training partner to sharpen your tracking and hunting senses. The variation of five different fur types adds to the enjoyment of Black Bear hunting.

Spawning
All Black Bears travel alone. You might spot several of them at once, but this will be due to some areas being very fertile soil for the spawning of these bears. You will also see accumulations near feeders, but they all came alone to the party and will leave again without company.

Clothing
The Black Bear has a decent eyesight. Consider using Sneaky 3D Summer Camo clothes to reduce your visibility. Sneaky 3D camo clothes provide no scent or sound reduction though. Black Bears have very good senses for hearing and especially smelling. Consider additional protection with Scent Eliminator. Also use Face Paint or a Ghillie Suit, but remember the loudness of this suit and reduce your movements to a minimum.

Note that the smelling ability is the strongest of the Black Bear's senses, so be extra careful around nearby bears.

Searching
The relation between weigh and score is rather strong. The very most of the top scoring Black Bears are +240kg. Follow tracks of heavy males and glass often. Especially the common (black) variant is somewhat hard to see in the woods. Others like the blonde variation however stick out like a sore thumb. Check the river and sea shores for them. If you see a dark object that looks like a rock but is moving, it might be a Black Bear.

Note that the Black Bear has a distinct walking sound similar to the Brown Bear that you can hear within about 30m (100 ft). If you can hear this sound behind a hill, lay flat and listen. You have come really close to a Black Bear and should be ready for a shot or for a run.

Luring
There is no caller or scent spray available for the Black Bear.

Baiting
This animal can be lured with Bait, i.e. food that is presented to the animal in appropriate containers. The baiting stations have two effects. They increase the number of spawnings of the attracted species in the area, and they attract those animals that come within the attraction radius of the container. Baiting is used by many players to accumulate great numbers of animals around the stations. Consider this very effective method if you enjoy hunting the species in question. Hunting your feeders can be nicely supported by using stands. Place yourself in a stand and shoot any number of baited animals near the feeder. Others will scatter and run away, only to return some time later. The attractiveness of the feeder will stay at 100% for the duration of the hunting session. You can harvest a great number of animals if you spend a few hours at your baiting station.

Field Judging
After you have been watching them for a while you should be able to tell a heavy Black Bear from a light one. However the score is calculated from the dimensions of the skull. It is not possible to tell a larger skull from a smaller one. It is advisable to shoot all heavy bears and spare the smaller ones in case you want stay undetected.

Shooting the animal
Make sure to bring a large caliber rifle when you fancy shooting Black Bears in the field. Even with a powerful rifle or a muzzleloader you still need to place the shot well. Vital organs are hard to reach when the bear is +180m (~600 ft) away from you. A good spot is right behind the front leg. Wait for the animal to make a step forward with the front leg, then shoot the spot that is now uncovered. This takes some practice though. Avoid risky shots to the head, or snap shots on a walking bear. Taking a few more seconds for a safe shot will pay off manifold if you want to avoid a long tracking of a wounded bear.

Getting very close for a bow shot is tough. Consider a shot over 40-50m (~130-165 ft) if you get a chance, as many times it will be the only one you have in a long time before the bear walks off or spooks. An arrow will always kill the bear sooner or later when you hit.

Naturally shooting Black Bears near a bait barrel is utterly easy in comparison, especially when supported by a suitable stand.

There is one tactic for shooting Black Bears that only exists for this species. Maybe a game design flaw, it is actually possible to catch up and keep up with a running bear. Some players take advantage of this for bow shooting the Black Bears. This video explains the tactics.

Following spooked Black Bears is a tough challenge. They encounter you from far away, now even more when they are in nervous state. It is essential to constantly glass the area. If you crouch after a high scoring bear and finally find a roaming track after many fleeing tracks, you have likely come too close already and spooked it again. 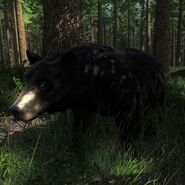 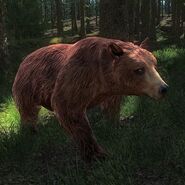 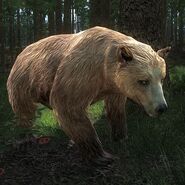 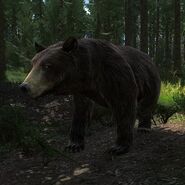 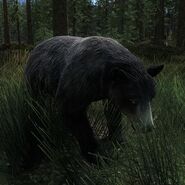