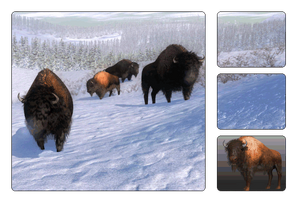 The American bison (Bison bison), also commonly known as the American buffalo, is a North American species of bison that once roamed the grasslands of North America in massive herds. They became nearly extinct by a combination of commercial hunting and slaughter in the 19th century and introduction of bovine diseases from domestic cattle, and have made a recent resurgence largely restricted to a few national parks and reserves.

Two subspecies or ecotypes have been described: the plains bison (Bison bison bison), smaller in size and with a more rounded hump, and the wood bison — the larger of the two and having a taller, square hump.Furthermore, it has been suggested that the plains bison consists of a northern and a southern subspecies, bringing the total to three. However, this is generally not supported. The wood bison is one of the largest wild species of bovid in the world, surpassed by only the Asian gaur and wild water buffalo. It is the largest extant land animal in the Americas.

When hunting Bison, the hunter must be careful not to get too close. The animal may charge the player. If the animal hits the player, the player is put into the Player Hurt state.

There is no attractant for the Bison.

Introduction
The Bison is the first bovine species in the game and makes its appearance with the opening of the Whiterime Ridge reserve. The bison stands its ground when you approach it, and it takes good shot placement to drop it without a long follow-up tracking. However when it is on the move, with or without peers, you have to keep on your toes to keep up. Even in the deep snow areas the bison moves very fast, similar to the Reindeer. When spooked, you will only see it for a few more seconds before it will leave your viewing range.

The fact that it takes quite a bit though for these massive animals to get frightened makes it an interesting balancing experience for you as to how close you can move to them, try to take out a few with well placed shots, and watch out so you don't get taken on the horns by one of them. There is no meeting with them half way as there is no lure available. The bison dictates where it is going to put up with you.

Spawning
The Bison is a herd animal, however you can also find single animals at times. The groups consist of up to six animals, of which one or two will usually be males.

Clothing
The clothes for going after Bison appear to be little of importance, as this clumsy animal seems to be the one that is the least frightened of them all. Even if it sees you approaching, it will not run until it feels you are really getting too close now. The Arctic camo clothes will make a small difference and you will be fine with just the Basic Arctic Outfit, which are free for you to pick up at the store.

Searching
Weight does correlate somewhat with the score. Follow tracks from heavy bulls. If you find tracks from a herd, always follow those. There is a chance that one of these males will have a decent score. If you hear a call no matter what gender, go check out the place. It could be a single Bison or a group. The bigger the group, the better the chance for a high scoring male. Scent Eliminator and Wind Indicator are not required for a successful hunt of this species.

Luring
No lure is available for Bison.

Field Judging
When you spot Bison, look for one with large horns. Soon you will be able to field judge the horns and tell a small score from a big one. High scoring bulls will have horns that exceed their skull. They are also thicker. You cannot distinguish males and females from the color, which is always similar no matter what gender. You can however look at the body sizes. Males will be visibly larger.

Dealing with herds If you fancy shooting any gender, roam around and look for their tracks or listen for their calls. If you are after the big male, leave signs of females behind and keep going until you find the according presence of males. When you encounter a group, try to spot them and receive information about their potential size and score. Spotting all animals also has the positive side effect of increasing your spotting skill for this species. Since there is no lure available, you will have to keep up with the fast roaming group. The spotting is difficult because you will be looking at a number of animals constantly walking, trotting and mingling.

Aggression
This species is one of those that can attack you. This happens if you shoot at it or when you got really close to it. The animal will start an aggression animation and look fiercely at you. It can also makes growls that you wouldn't normally hear. If you see the animal doing this you have a chance to run away or get ready for a shot. Sometimes the animal will abort the attack and flee. It can also happen that an animal will start fleeing but then stop and turn around for an attack. If you are very close to a species capable of attacking, have a firearm ready for your defense, or back out. You can also be completely blindsided by an animal that you did not realize it was there. When attacked, you will be hurt and will need to either heal yourself with a First Aid Kit or fast travel to a tent or lodge. Carrying a strong handgun such as the .454 is advisable for self defense in case the Bison decides to plow over you. You can dodge an attacking bison maybe once, but barely twice.

Shooting the animal
A shot on Bison must be well placed, or you will be in for tracking and a follow-up shot. Avoid hasty shots. A good Spotting Skill will support you picking the right animal if there are several. Wait until the animal of your choice has come close enough for a good shot, or until you can safely hit a vital from the side. Aim above the leg, roughly at the bottom of the reddish area on the animal's side. Another comparably safe area is the very large spine, especially behind the neck. Many a shot aimed high will end up being a spine shot, which will either kill the bison immediately (when hitting neck bones) or paralyze it (when hitting other spine bones).

Bow hunting the bison is possible, but takes patience and care. Get within 30m, or a long search will follow.

Remember that the Longbow and shotguns are not allowed for Bison.