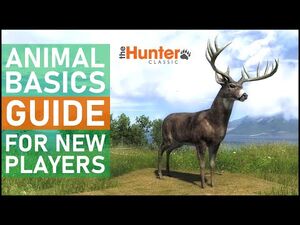 The following animals are permanently huntable, i.e. all year. Huntable means that the animals...

There are many animals in the environment that merely add to the atmosphere, but are not really huntable

This article is based on this developer post in the game forum.

This article is based on this and this developer thread in the game forum and subsequent developer posts.

In real life animals interact with other animals, be their from the same or from other species. In theHunter Classic, some animal interaction can be observed.

Some animals travel in groups. Every herd has a leading animal. This is not necessarily the highest scoring animal in the group. It could even be a female animal among a mixed gender group. If luring attracts the leader, the rest of the group will follow. After you spook the herd either by shooting or your presence being detected, the herd will scatter. When the animals have calmed down, they will attempt to regroup. This is often done by trotting in order to catch up with the leader again. Especially if all animals have run into the same direction, the herd will likely regroup. If they get completely separated (running away in a star pattern), they won't be able to fully regroup and continue as loaners or in smaller groups.

Spooking Others by Running

Spooking Others by Threat

Certain animals become nervous when other species are around. This will be expressed by trotting around aimlessly. There are no predator situations where animals will kill other animals, and animal chasing only happens with grey wolves and rocky mountain elk.

The following table shows what animals have been observed making other animals nervous. Most information is unofficial.