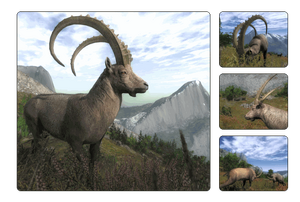 The Alpine ibex (Capra ibex), also known as the steinbock or bouquetin, is a species of wild goat that lives in the mountains of the European Alps. It is a sexually dimorphic species with larger males who carry larger, curved horns. The coat colour is typically brownish grey. Alpine ibex tend to live in steep, rough terrain above the snow line. They are also social, although adult males and females segregate for most of the year, coming together only to mate.

The Alpine ibex was, at one point, restricted only to the Gran Paradiso National Park in northern Italy, and in the Maurienne Valley in the French Alps but in recent years it was both reintroduced to and recolonised most of the European Alps, and is also found in most of all the French alpine ranges, southern Germany, Switzerland and Austria. It was also introduced to Bulgaria and Slovenia.

There are no attractants for the Alpine Ibex.

Introduction
The Ibex presents a slightly different playing experience that for example that of deer species. It is located in the higher regions of Val-des-Bois and has outstanding climbing abilities. It can climb up very steep mountainsides, even to places where a player cannot get. Ibexes are wary and quiet animals who blend in well in their native Alpine environment. The Alpine Ibex is a skillful climbers. It can climb almost vertical cliff faces with ease, so going after them will require a great deal of knowledge of the area. Some steep surfaces may be possible to climb, others will lead to a quick drop down to harm. Wise hunters always bring a First Aid Kit along when hunting Ibex in Val-des-Bois. When hunting Alpine Ibex, there should be a lot of planning going into every shot to avoid losing that great trophy. After all, that is what makes hunting Alpine Ibex worth it: those magnificent horns!

Spawning
Ibexes spawn and travel as singles or in mixed groups of up to six animals. The does always build the majority of the group, and there are not more than two bucks in a group.

Clothing
Val-des-Bois is a summer map, however the Sneaky 3d Summer Forest camo only protects you against the Alpine Ibex in the very scarce forested parts in the mountainous regions. You are much better off with the Sneaky 3d Alpine camo set which is specifically designed for this type of terrain. You may also use the Outback Outfit and/or Face Paint, a Cowboy Hat or a Flat Cap to reduce the signs of your presence.

Searching
Weight correlates somewhat with the score. Follow tracks from heavy bucks. It is possible to get audio clues from the Ibex but these are sparse and are never calls. The Ibex does not call like other animals. It has a rock slide sound when in the steep slopes. This sound is registered like a call on the Huntermate. Ibex fighting can also be registered with the Huntermate. The fights are usually not very long and by the time you arrive to observe them, they might have ceased fighting already. Nevertheless their fighting can give away their location. If you hear ibex activity, scan the area. If there is one, there might be more of them. Ibexes utter a recurring chirping sound when they flee, which gives away their running direction. This is similar behavior to the Roe Deer's barking when spooked. They keep chirping for quite some time even after they have stopped running. Follow that sound and often times you will see the Ibex in the distance standing still.

Luring
There are no attractants available for the Alpine Ibex, which makes it one of the species that require a pure spot and stalk style of hunting.

Field Judging
Look for long and thick horns that bend backwards. Large scoring ibexes have horns that almost tough their back (in the game).

Shooting the animal
Shooting the Alpine Ibex must be somewhat planned. Survey the land with your optical devices. It will be tempting to fire at an Alpine Ibex high up on a mountain wall but it may have unfortunate consequences. If you shoot an Ibex on a cliff-side with either an outcropping or a slope that lacks enough inclination below, the dead animal can get stuck. Wait for a better opportunity, which might however take a very long time. A shot Ibex will slide or roll down as long as the incline is steep enough. If the animal stops in a place that cannot be reached from below, try to get to the animal from above. In many cases there simply is no way to the kill. This video explains how you might still be able to retrieve your Ibex.

It is possible that the Alpine Ibex will be outside the border. You may clearly see it on a mountainside and you can aim at it, but the game will prevent you from shooting it. You have to again wait for it to return to the inside of the reserve boundaries.

A good weapon for the hunt on the Alpine Ibex is the fast reloading .30-06 Lever Action Rifle. Often times you will find a group of five to six animals. You can keep shooting with this rifle while keeping sight on them. Spooked animals tend to run in circles in front of steep walls of cliffs instead of climbing them. Wait for them to stand still for a second or two during their flight before they run off again, and you can take out a few at a time.

Listen for the chirping sound and let the animal calm down from its trotting after fleeing for a safe shot. If you have approached them from behind a hill and all of a sudden you hear them run away for some reason (you will hear the chirping), get up and run to the top of the hill. Often times you can still pick out a few Ibexes while they are trying to find a path away from you. Cliffs and walls will again confuse them just enough to keep them within reach.

Thanks to community contributor Cireme for this map. 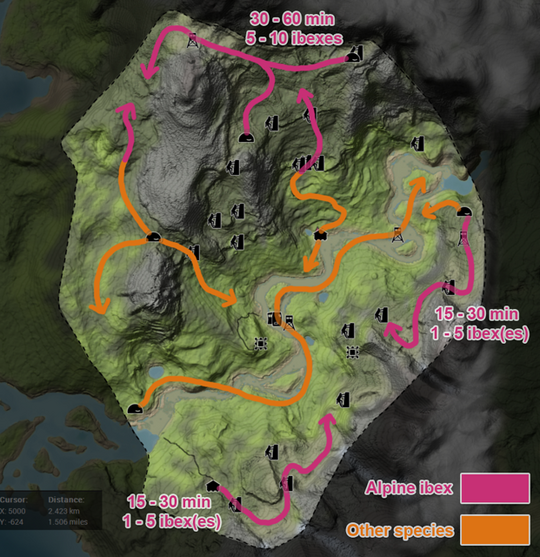